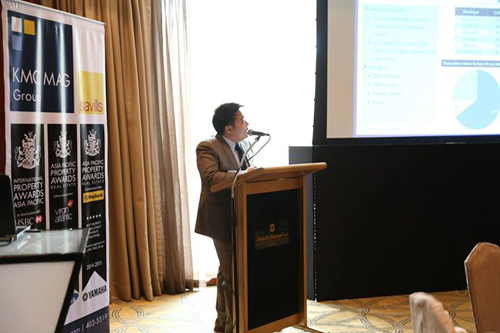 KMC discussed current and future trends in commercial real estate, focusing on the country's potential for investments in areas outside Metro Manila.

"There is still so much demand. The increase in price is driven by the shortage in supply. We're seeing single-digit vacancy rates below five percent across the central business districts (CBDs). In terms of take-up, that's quite impressive especially if you look at it from a regional standpoint."

"Within the metro, investors and developers are exploring Quezon City and Bay City as potential central business districts to spread out job opportunities, foot traffic and even investments more evenly within Metro Manila. All the big developers are there, and the government has been very supportive. Green building regulations are already being implemented in the office and commercial space. And being the largest city in Metro Manila, it will help in bringing the workplace closer to the people."

Quezon City as a potential CBD.

"Quezon City is the largest city in Metro Manila, it is the location of numerous government offices, it is the home of major broadcasting networks and major educational institutions, and has an extensive railroad and road network."

Bay City near Roxas Boulevard is another area that shows great potential as a business district.

"While land prices are slightly increasing in these areas, we see it growing to be one of the major hubs for office locators and entertainment. There will be a high demand for residential as well, which will becoming in from the foreign market."

Decongestion of Metro Manila might be the solution to sustain growth.

"The long-term economic growth of the Philippines is dependent on whether or not it can address the issue of decongestion and make smart, sustainable decisions to improve its infrastructure," KMC Mag Group managing director Michael McCullough said.

Luethi: All things needed to sustain the Philippines’ growth trajectory are in place.

"In terms of Metro Manila, infrastructure projects have been proposed. The Philippines is enjoying the best credit ratings it has ever had, and it has the knowledge and support of institutions like the Japan International Cooperation Agency, among others."

However, more is needed. All sectors would stand to benefit from government support especially in terms of infrastructure.

The Philippines has become one of the fastest growing economies in Asia. However, experts warned that the economy may be at risk of overheating if the government fails to address infrastructure holdups.

Porciuncula: Decongesting Metro Manila and building the necessary infrastructure are the key issues for the Philippines to sustain growth momentum.

Business investments need to be redistributed not only in sprouting central business ditricts (CBDs) Metro Manila but also in provinces, he noted.

"The middle class is now looking for efficiency-we're seeing weekday houses where the family shares a one- or two-bedroom, and then on weekends come home to their primary homes outside the city. We're getting to a point where they can actually afford a solution that isn't exactly cheap because you're looking at a mid-cost, nicely made condominium worth at least P3.5 to P4 million. So while traffic hasn't [directly] affected property development per se, it's driving additional spending towards real estate, whether on the leasing or acquisition side."

How Virtual Reality aids Real Estate amid the COVID-19 crisis

Why Mandaue City is the Next Key Location in Visayas