Why Iloilo is the next ‘It’ city

Why Iloilo is the next ‘It’ city Iloilo is set to reap the fruits of President Rodrigo Duterte's economic plans.

Department of Budget and Management Secretary Benjamin Diokno talked about the Philippines' bold economic plans that focus on top infrastructure and human capital. The Duterte administration will also strengthen the country's financial capacities through the general appropriations act and other budget and cash management reforms as an attempt to sustain its place as the fastest growing economy in the region. Secretary Diokno also elaborated on their plans to reach "upper middle-income status" and reduce poverty incidence significantly as they give the lion share of the fiscal year to social services.

With plans to decentralize the development in Metro Manila, the British Ambassador to the Philippines Daniel Pruce is proud of the growing partnership between the two countries. With a large British delegation deployed to strengthen economic cooperation, the 1-billion pounds of investment will go beyond Metro Manila and in cities like Iloilo. He also announced that the Commission on Higher Education (CHED) and the British Council are working on providing more education opportunities to Filipinos abroad. The University of the Philippines Visayas also noted that higher education plays a crucial role in developmental synergy and innovation.

Iloilo Governor Arthur Defensor Sr. and Mayor Jose Espinosa III was also present to showcase the several investment opportunities in the city. As the "real Queen City of the South", they claim to be just one notch below Davao City and recognizes the British legacy in making Iloilo a prosperous city. With the "Iloilo means business" campaign, the city has shown amazing recovery and is ready to produce good infrastructure and workforce.

Governor Defensor also announced that they are ready to break ground for the country's biggest water reservoir that will irrigate 32,000-hectare of rice and sugar lands. This will help sustain Iloilo's prolific food production, agri-business, and tourism industries.

Espinosa also planned on keeping the cost of living in Iloilo 35% cheaper, and eventually, project Iloilo as a highly urbanized city with the best roads for land and coastal travel. In terms of real estate, Metro Iloilo is picking up on the potential of becoming a residential hub and office space for all. They are also working on getting PEZA accreditation for several economic zones in Damangas, Concepcion, and Pasi to invite the Business Process Outsourcing sector for office expansions. 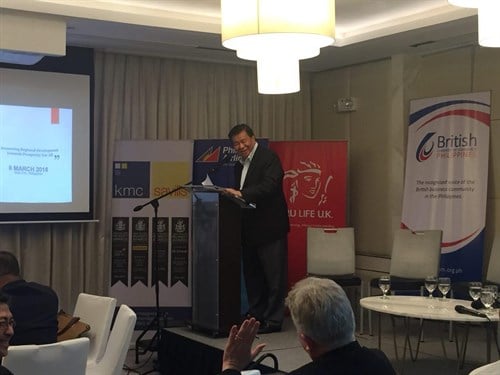 Senate Minority Leader Franklin Drilon delivered the closing remarks for the trade mission. He emphasized the long history of Iloilo's economic viability and development. Drilon also labeled Iloilo as the early adaptor of the Build, Build, Build program, underlining the political importance of the ports to the city.

The Iloilo office market is also looking forward to its own trailblazing evolutions. With the booming Iloilo Business Park, KMC Savills aims to offer it as an ideal location to future tenants and corporate locators. The steady rise of investment and business opportunities in the city is also a key consideration. Research Manager Fredrick Raraalso said "The city saw an influx of offshoring and outsourcing locators in the last five years. This has led to an expanding office market which was rather non-existent almost a decade ago."