Doing Business in the Philippines: POGO regulations every business should know

https://kmcmaggroup.com//research-insights/2019/doing-business-in-the-philippines-pogo-regulations-every-business-should-know/
POGO,Philippines,Business,PAGCOR,regulations,BIR,taxation,taxes,licensing,license,
Doing Business in the Philippines: POGO regulations every business should know

Doing Business in the Philippines: POGO regulations every business should know

The Philippine Offshore Gaming Operators continue to bring growth to the country’s revenue. The POGO sector has registered a significant increase in 2018 after it recorded PHP 7.265 billion in revenues. This is double the amount the sector contributed in 2016 and 2017 combined.

According to Philippine Law, a POGO entity is any offshore gaming services that offer games of chance via the internet, a network, or software. The operators bet on behalf of the participating accounts and pay the winning players. All Philippine Amusement and Gaming Corporation (PAGCOR) licensed operators do not allow Filipinos as offshore authorized players.

Here’s everything you need to consider before setting up a POGO in the Philippines:

PAGCOR act as the main regulatory body for offshore gaming services. They issue licenses to both qualified Filipino- and foreign-based operators. It also has an Offshore Gaming License Department that is assigned to become the main regulatory authority over online gaming operations. There are also a number of gambling regulators allowed by the government to issue licenses in other regional areas. This includes:

Given its increasing presence in the Philippines, the government has set up an interagency task force with other concerned bodies to ensure smoother operations. The Bureau of Internal Revenue created a customized taxation for POGOs while the Department of Labor and Employment (DOLE) and Bureau of Immigration (BI) concern themselves with the employment of foreign workers in the country.

The providers are also tasked to register their company to the Securities Exchange Commission (SEC) for lawful employment and monitoring of Tax Identification Number (TIN). Local authorities such as the Philippine National Police and the National Bureau of Investigation are tasked to consolidate and reconcile the list of foreign workers currently working for POGOs.

The government also came out with a framework that covers all components for gaming operations including software, business outsourcing, and content streaming providers. These entities are also required to secure PAGCOR licenses to avoid the proliferation of illegal online games in the Philippines.

The framework details all application requirements including documents, processes, and other financials that POGOs need to submit. It also details the general conditions that providers need to abide by and other suspension and cancellation grounds to avoid.

Executive Order 13-2017 is also issued to strengthen the fight against illegal gambling. The order sought to clarify the jurisdictions and authority of the regulating agencies involved in the POGO sector.

The government is treating POGO that are doing business in the Philippines are considered resident foreign corporations by the BIR. Therefore, they are subjected to local taxes to legally operate.

According to the Revenue Memorandum Circular 102-2017, POGOs are subjected to 3 types of taxes:

The income generated by POGO are subjected to a 5% franchise tax. This is on top of all kinds of taxes, levies or fees and assessments.

The income from other related services or non-gaming operations will be subject to normal income taxes, value-added tax (VAT), and other applicable taxes.

Compensation, fees, commissions, and renumerations rendered to POGO by employees and its respective service providers are subject to withholding tax on compensation or expanded withholding taxes.

POGOs are also required to file applicable tax returns, pay internal revenue taxes, and submit information returns and other tax compliance reports. You may use the BIR form 2303 or Certificate of Registration as a good reference for tax returns filed and paid.

At the moment, there are 55 approved Philippine Offshore Gaming Operators in the Philippines. Here’s the rundown of the accredited operators: 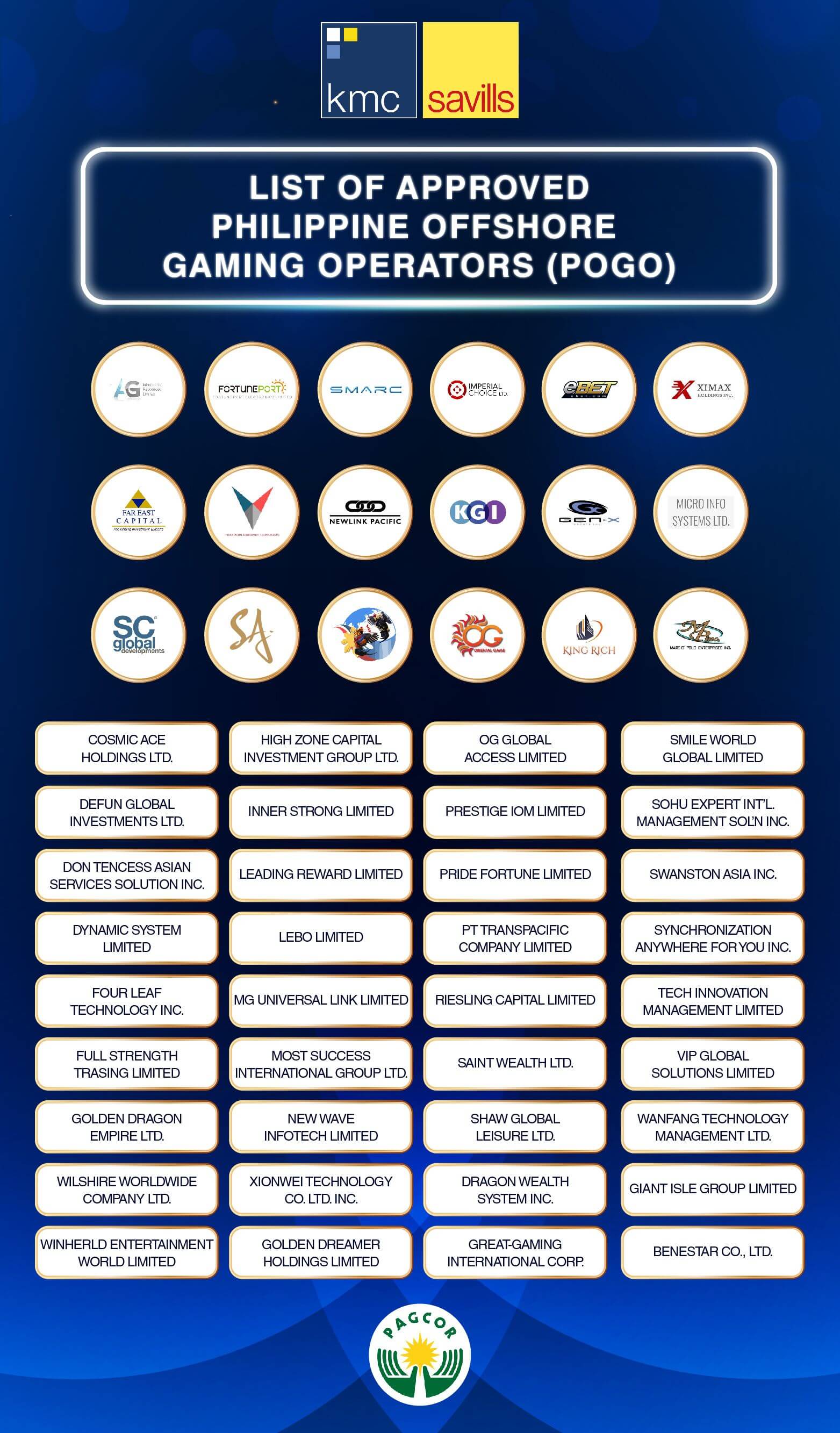 WFH in the Philippines: Why is 3H the best working arrangement during the pandemic?

The New Normal in the Workplace: How KMC’s Women Leaders Build a World without Glass Ceilings in Corporate Real Estate

PH Tourism Recovery: What does COVID-19 vaccination mean to the Hospitality and Leisure Industry?